Highlights of part I – Macro Fundamentals

In the first part of this seminar we begin by defining what heterodox economics is and how it differs from the orthodox approach.
We then introduce a fundamental approach that allows to consistently explain macroeconomics fluctuations: the sectoral balances approach. We divide the economic system into 3 sectors (Private, Public and Foreign) and analyse how they work and interact with each other.

The macroeconomics environment can be divided in 3 sectors:

The domestic public sector contains all the domestic government entities, hence the central government (the State), the local governments (regions, provinces and municipalities) and the public authorities (profit and non-profit organisations owned and run by the government).

The domestic private sector contains everything which is not public, and so we have households, companies and private non-profit organisations.

All public and private entities outside the domestic space belong to the foreign sector, or rest of the world.

The environment built upon these 3 sectors is nothing less than the Planet Earth. This system is therefore close because, as far as I know, we are not currently trading with any other planet of the solar system.

One sector loss corresponds to a win for at least one of the other two. 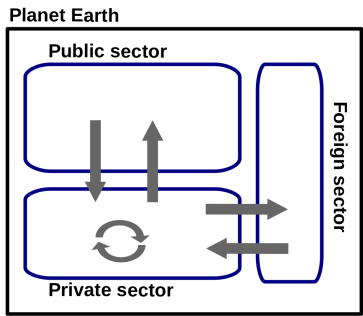 The figure above gives you a visual idea of the 3 sectors system. Every entity or transaction that exists or is produced on this planet, the Earth, must belong to at least one sector.

Now we move from an abstract 3 sectors system to the real world, and for doing that we need an indicator, a measure of the wealth and income of a country, the Gross Domestic Product.

The Gross Domestic Product (GDP) is the most common indicator used to measure the output, or the aggregate income, of a country.

There are 3 different approaches to calculate the GDP:

We will combine the expenditure and income approach in order to derive the sectoral balances.

Following the expenditure approach, GDP is obtained as a sum of 5 principal components:

This relation says that the total national income (GDP) is equal to the sum of final consumption expenditure (C), total private investment (I), total government expenditure (G) and next export (X-M).

From the income approach, GDP (national income) can be used for consumption, saving and tax payment:

By equating the two GDP definitions, GDP expenditure = GDP income, we get:

And after rearranging the terms (C is cancelled out):

We now proceed to assign each portion of the GDP to each sector of the economy, each sector has its own balance identity, with relative outflows and inflows, defined in GDP terms.

We can rewrite these 3 balance identities as follows, they are equivalent:

When the domestic public sector is a net lender it is in deficit while it is in surplus when it is net borrower.

Foreign Net Lending ⇒ (X – M)
When the export of a country exceeds the import it means that the foreign sector is lending hence it is in deficit.

The figure below gives you an idea on how the different flows move between the 3 sectors.

For the public sector, G is an outflow (spending) while T is an inflow (tax income).

Import (M) and export (X) are respectively a financial inflow and outflow for the foreign sector.

Saving (S) and Investment (I) are endogenous to the private sector. This essentially means that the private domestic sector cannot accumulate financial wealth without the public and/or foreign outflows (we will deepen this concept in the coming paragraphs).

The relations between the balances of the 3 sectors are the key to consistently understand the fluctuations occurring in the economic system.

A Sectoral Balance model formalises the relations between the 3 balances and their impacts on the whole macroeconomics system. The pioneer work on this approach was conducted by Wynne Godley and today it is widely recognised and exploited by major financial actors, Goldman Sachs is one of them.

As we saw in the previous paragraph, the 3 sectors, domestic public, domestic private and foreign, compose the whole macroeconomics system. This system as whole, is close and every outflow of one sector corresponds to the inflow of (at least) one of the other two.

It follows than the sum of the 3 sector balances is equal to 0; at a global level all outflows and inflows sum to 0.

which is equivalent to:

For the sake of simplicity, let’s consider a foreign sector in balance (X-M = 0) and focus on the relation government deficit – private surplus: (G – T) = (S – I).

The private sector cannot create financial wealth without an exogenous injection that can come either from the government sector or the foreign sector (or the government sector only in case of a closed economy). For every credit there has to be a debit as well as for every revenue there is an expense, so the private sector itself can just change the distribution of the same amount of financial wealth but not create new one.

This is the financial side, the real side is a different story, you can always exchange goods-for-goods (barter) or (if you have the skills) you can do some enhancement to your house that can eventually increases its market value.

At aggregate level, as long as there is enough liquidity/financial wealth in the private sector an increase in the investment expenditure generates an increase in profits hence income, hence saving. In a situation where aggregate investment exceeds aggregate saving the private sector is short of financial wealth and only an expansive fiscal policy from the government can restore the equilibrium.

Private and public exogenous expenditures have different impacts on the sectoral balances. The same rate of growth in income has varying implications for the domestic private sector’s financial balance (saving minus investment or, equivalently, disposable income minus private spending) depending on the composition of the demand driving that growth. An increase in private investment pushes the private sector toward deficit. Even though the investment boosts income, saving will not rise as much as investment because of leakage to taxes and imports. In contrast, government spending adds income and saving for a given level of investment. An implication is that growth driven by private expenditure that occurs without compensating growth in government spending pushes the private sector into deficit except to the extent that net exports counter the effect.

Extract from Business Insider – Goldman’s Top Economist Explains The World’s Most Important Chart, And His Big Call For The US Economy
“…every dollar of government deficits has to be offset with private sector surpluses purely from an accounting standpoint, because one sector’s income is another sector’s spending, so it all has to add up to zero. That’s the starting point. It’s a truism, basically. Where it goes from being a truism and an accounting identity to an economic
relationship is once you recognize that cyclical impulses to the economy depend on desired changes in these sector’s financial balances.”
Jan Hatzius – Chief economist of global investment research at Goldman Sachs

If you notice the title of the article, there is a mention to the “World’s Most Important Chart”, this chart is displayed below.

The graph is an empirical representation of the 3 balances identity:

At each time point the sum of the 3 balances is exactly 0, that’s why the graph resembles a mirror.

From the Sectoral Balance model just introduced we can derive 5 fundamental macro-accounting principals:

Let’s put this in terms of stock and flows and explain it with an example.

Every month it has a balance surplus (income > spending) of 10$, if we hypothesise that income and spending are constant over the course of the year, the household has 10$ of saving flow each month.

At the end of the year the sum of all the monthly flows accumulates to a stock corresponding to the accumulated households’ financial wealth (1200$).

If the same household had a spending of 110$ instead, there would be the opposite effect: a monthly budget deficit would generate and indebtedness flow of 10$ that at the end of the year would reduce the financial wealth by the 1200$.

How can a sector run a deficit?

A domestic private actor, household or firm has 2 options for running a deficit:

Consider a situation where the public sector goes in surplus and the foreign sector remains in balance. By identity the private sector goes into deficit and it is forced to:
→ draw from previously saved financial wealth and/or
→ borrow money

The figure below shows the possible equilibrium in the economic system when the foreign sector is in balance. Since the sum of the 3 balances must always be 0, we can either have a situation when the public sector is in surplus and the private is in deficit (top-left) or vice-versa (top-right), although it is never possible to have both sectors in surplus or deficit (bottom). 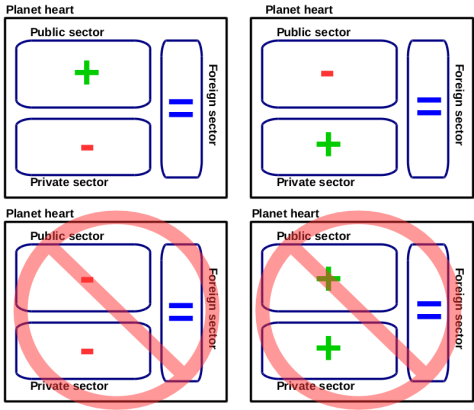 There is actually a third plausible scenario that I didn’t specifically included here, the one where all the 3 sectors are in balance.

No rights reserved. All parts of this publication MUST be reproduced, distributed, or transmitted in any form or by any means, including photocopying, recording, or other electronic or mechanical methods, without the prior written permission of the publisher.